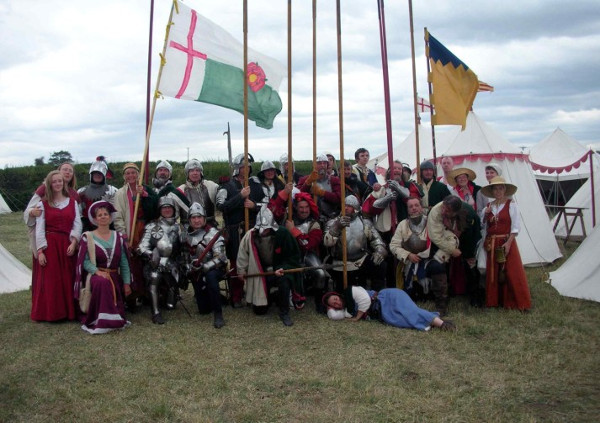 A few members of our group stayed at Bosworth/England for a re-enactment weekend.

Between 1455 and 1485 there were several wars between the House of York and the House of Lancaster, two noble families in England. Both of them wanted to get the power and the throne of England. An important event was the battle of Bosworth in 1485 between Richard III and his opponent Henry Tudor. Richard became king of England after the death of his brother Edward IV and after they had taken Edward´s sons to the Tower of London. Henry Tudor claimed the English throne for himself either. Both noblemen had a rose on their flag, a white rose for the House of York ( Richard´s family ) and a red rose for the House of Lancaster ( Henry´s family ). Richard was killed in this battle and Henry Tudor became the new King of England.

Market Bosworth and the battlefield is near Leicester/Birmingham and a visitor centre let people relive this historical battle in1485.

Marion, Peter and Birgit used this event to visit London as well. Captain Peter was on a holiday on the British Isles. Martina, Selina, Petra and me took the plane from Baden-Baden-Airpark to London-Stansted, we continued our trip by train to Leicester and finally a taxi dropped us at Bosworth Battlefield. Our English friends, the Free Company had pitched the tents for themselves and for us before. We just had to move in.

You could see a village of medieval tents ( the living history camp ) and also stalls with medieval equipment whatever you want. Shoes and vessels made of leather, knives, weapons, jewellery just to mention some of them.

Falconry, the sport of kings was shown, too.

On Saturday evening we had the chance to visit the exhibition in the visitor centre. We got a good survey about the life of Richard and Henry. And even Henry VIII was illustrated with his different wives.

The highlight of this weekend was the battle of course. Many spectators came standing behind two ropes for safety to see the performances. The more they gave applause the better the warriors fought. The House of Lancaster with Henry Tudor was the winner. Richard, the dead king was taken away on his horse.

In the evenings and nights we had a lot of fun with our English friends by sitting in front of the tents. We enjoyed drinking and eating together and had a lot of entertainment with German and English tongue twisters.

On Monday morning this wonderful weekend was over and we had to leave.

Marion, Peter and Birgit continued their sightseeing by visiting Cambridge and Brighton.

Martina, Selina, Petra and me interrupted our trip back for a short stay in Cambrigde.